I sat across from my publisher this weekend as we ate lunch at the Ohio Christian Writers Conference (OHCWC) and had a productive conversation. We talked about the release date of my first book among other topics. I am so blessed and excited to know this is about to happen – just in time for Christmas.

We also discussed another project I have worked on for the past year. In my stubborn opinion (yes, I can be that way at times), I was under the impression it was done and ready to be shipped out and signed to a multi-billion-dollar contract.

But her fantastic idea for a way to change the direction of my venture blew me away. I realized God put me there for this very reason. I now know what the hold-up has been. The Lord has bigger plans.

“For I know the thoughts that I think toward you, saith the LORD, thoughts of peace, and not of evil, to give you an expected end.” Jeremiah 29:11

He wanted to make sure I had improved as a writer before He revealed His masterful direction. I can tell my work has improved a great deal. That was evident this past weekend for me.

The same thing happened to my friend Jake, who I reconnected with at the conference. We first met last May at the Blue Ridge Mountain Christian Writers Conference.

His journey to become a writer started in 2011. He and his wife had just become first-time parents, and he had the “brilliant idea” to make extra cash with his pen. “That didn’t happen,” he said with a laugh.

Jake, who is from the hometown of Walmart in northwest Arkansas, was a full-time pastor and had the revelation to turn his prophecy lessons into a book. He worked on it from time to time when his wife finally encouraged him to finish the project he started.

He heard of the Blue Ridge Mountain Christian Writing Conference and felt the desire to attend. He submitted his manuscript for a critique, and it drew immediate attention. An editor advised him to change gears and listen to suggestions if he wanted to get his work published.

He literally threw half his manuscript in the trash and rewrote the chapters. He stayed in touch with the editor and eventually attended the conference in North Carolina.

There he met Cyle, and became friends. “We were the only two guys there it seemed, so we connected,” he said with a laugh. They stayed in touch, and God delivered His plan at the right moment.

Later Jake was in the middle of nowhere on a hunting trip when he received a text from Cyle to let him know he was now a literary agent. “I got that message at 9:00, and at 9:01, I sent him my proposal.”

His book, Spiritual Prepper, is brilliant and will grab your attention from the first paragraph. He won an award for his work at the OHCWC held near Cincinnati this past weekend. I was thrilled for him because I am aware of his talent and desire to be used by the Lord.

Likewise, he was happy for me when my name was called from the stage to recognize my work. I have entered several previous contests at other conferences and never made the cut. Not even honorable mention. I felt discouraged at times.

But at this event, I received three honors–two first-place awards and an Outstanding Author award. I am not boastful, but I want to make the point you must listen and take advice from experts if you want to improve and be used to glorify Christ. I give God the glory for my accomplishments because everything I wrote was to honor Him.

I listened, learned and applied.

Jake and I have something else in common–we both have groups of Christians to depend on for advice and counsel. He put together an accountability group, and I have formed a personal advisory board. 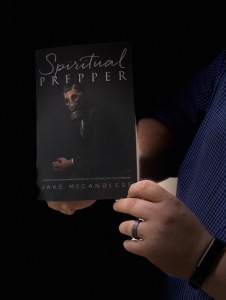 “One person in my group called me every week and asked what I did for the week,” he said. “They made sure I got the book done.”

God is amazing in the fact we are both similar in this regard. I was not aware he formed his committee until we spoke this week. We both thought it was cool we have taken the same approach to keep us on track.

I want my board of men to keep me focused and motivated. I want us to share our struggles and successes and pray for each other.  Brutal honesty will be on the agenda. We will not judge but encourage.

Jake’s story of being told to toss half his manuscript and begin a new one was also ironic. The publisher I am working with on my book had an idea for a manuscript I have worked on for the past year. Her suggestion is incredible, and I think it will make this project a million times better. I don’t have to throw away half of my work, but I will change the format and take a unique angle.

I now know why I have waited. I am encouraged and will take her advice. I discussed her brainstorm with my agent, Cyle, and he agreed it was great direction and feels it will be even better than I hoped. Thank you, Lord. We even discussed a new title which is more compelling. And yes, Jake and I have the same agent.

“Writing is a typo for waiting.”

If you are discouraged due to inaction or other reasons, do not give up. I learned why I have waited, and it all makes sense to me now.

My friend Amy said something from the stage during the conference that caught everyone’s attention. She wisely said, “writing is a typo for waiting.” How true.

If Jake was offended by the editor’s advice and gave up on his project, he might have skipped the writing conference at Blue Ridge. Then he might not have met Cyle. Wow.

The same is true for me. I originally had other plans for this past weekend. Angie and I had already paid for another trip down south when I heard Cyle had organized this conference. We struggled for a few weeks about what to do. but we ultimately opted for Cincinnati. We made the right selection.

Had I not attended, I would not have spoken with my publisher on how to change my beloved project for the better. I also would not have won three writing awards.

“Wait on the LORD: be of good courage, and he shall strengthen thine heart: wait I say, on the LORD.” Psalm 27:14

God works in mysterious ways – but it always works out.

For those who are discouraged by the wait, please know better things are in store. There are times when it might appear He cannot be found and does not hear you, but rest assured He does. He instructs us to wait on Him to reveal His plan. Jake and I are proof it works.

Do you need to improve your patience? We all do at times. Who do you turn to in times of discouragement?

Jake has two websites. For more information about his prophecy ministry, visit online at prophecysimplified.com. To find out more about his articles and projects, visit jakemccandless.com.

7 thoughts on “Wait on God’s Direction”