Next week, we will celebrate July 4th—the 242nd anniversary of our independence as a nation.

My church at Rubyville Community in rural Southern Ohio does it up right. We have fireworks along with a patriotic service. Our church normally runs about 400 people on an average Wednesday night. But next week, there will be about 10,000 people in the valley to observe our magnificent display.

We love our country and what it represents and we thank God for the United State of America.

But sadly, not everyone appreciates how the Lord has blessed our nation. I treasure the sacrifices of those who made it possible for me to enjoy freedom. I honor them and our Flag.

I will not be discouraged by those who make a mockery of Old Glory or our leaders. I did not support President Obama,  but I never disrespected the man or his office. He was my president through lousy times, brought on by his administration. Both my wife and I lost our jobs during his eight years in office. But now, it’s time to MAGA!

I become nauseous when I hear some of the elite Hollywood crowd disgrace our country. Where are the old patriotic actors who once demonstrated their love for this nation? We still have some, but we need more. There’s Bruce Willis, Clint Eastwood, and Vince Vaughn but they are few and far between.

I miss real actors like John Wayne, who proudly touted the Red, White, and Blue and did not back down one bit. Today’s liberal actors can learn a lesson from an American icon.

Now we have the likes of Alec Baldwin, Jane Fonda, and Joy Behar who try to shove their left-wing agendas down our throat. Not mine. Plus, we have the likes of foul-mouthed Robert De Niro who childishly voiced his hatred for our president on a national television awards show.

I’d love to see the Duke bust De Niro right in the Oscar!

When it comes to the entertainment world, we used to have patriots with the microphone. We still have people like Lee Greenwood, Dolly Parton and Kid Rock who are patriots. But I miss the King of Rock and Roll who always included songs about America in his concerts.

Now we have whiners like Barbara Streisand and the Dixie Chicks, who once shouted they were embarrassed by President George W. Bush and who posted a picture of President Trump with devil horns during a show.

It’s no wonder patriots like Elvis, who has been dead for more than 40 years, still, sell more records than the Dixie Chicks ever will. Fans turn a deaf ear when singers start to get political and run their mouths in ignorance. The cliche shut and sing holds true.

And then there is the poster child of the un-American athlete. Colin Kaepernick, in my opinion, is a complete disgrace and ungrateful has-been of a football player.

We need more men like J.J. Watt, of the Houston Texans, and Tim Tebow who are both 100 percent patriotic. And lest we ever forget Pat Tillman, who left his lucrative job in the NFL with the Arizona Cardinals to join the Army Rangers after the terrorist attack on 9/11/01. He is a real hero and died in Afghanistan so cowards like Kaepernick can stoop and hide during the National Anthem.

Honest Americans have a deep love in their heart for the Flag and what it represents. 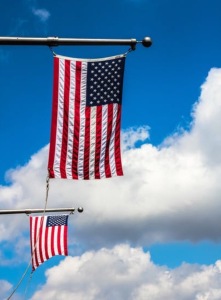 I want to go back to one of my favorite stories in history and re-visit how Francis Scott Key came to write the National Anthem – you know – the song Kaepernick will not stand and honor?

A portion of this post is from my blog on July 4, 2017, when I set the tone for Key’s inspirational poem.

At the time in 1814, Key was a 35-year-old lawyer and received permission to board a British ship in the Chesapeake Bay during the ongoing War of 1812. He hoped to convince the British to release a friend who had been arrested. During the visit, he and his friend learned of the impending attack the British were going to launch on Fort McHenry and the Americans in Baltimore Harbor.

They were allowed to go back to their own ship; however, they were heavily guarded so they would not warn the Americans of the pending attack, according to Smithsonianmag.com.

It was a rainy night on September 13, 1814, and Key watched in horror from his vessel as the British pounded Fort McHenry with rockets and shells. This went on for more than 24 hours. Bomb after bomb, rocket after rocket barraged the fort. The Battle of Baltimore was enraged and came a short time after the British army attacked Washington D.C. and burned the Capitol and The White House.

By all accounts and from what Key witnessed, Fort McHenry had fallen.  The Americans had been defeated. All hope was lost. The Brits were going to win. The night sky, as he later wrote, became red with flares and shells. He described the scene as “fire and brimstone.”

But then came the morning. Then came “dawn’s early light.”

What he saw in the distance was a miracle. I can only imagine he must have done a double-take. Then a grin had to come over his face. It wasn’t the Union Jack flag he saw flying. It was the tattered Red, White and Blue American Flag fluttering amidst the clearing smoke and the rising sun.

America had not surrendered or lost, but somehow, had won the battle. Filled with inspiration, Key wrote The Star-Spangled Banner – which was originally called Defense of Fort McHenry. Just try to put yourself in his shoes and REALLY read his incredible and moving account of the aftermath of the battle. He was glad and proud of the flag — the symbol of freedom.

O say can you see, by the dawn’s early light,
What so proudly we hailed at the twilight’s last gleaming,
Whose broad stripes and bright stars through the perilous fight,
O’er the ramparts we watched, were so gallantly streaming?
And the rockets’ red glare, the bombs bursting in air,
Gave proof through the night that our flag was still there;
O say does that star-spangled banner yet wave
O’er the land of the free and the home of the brave?

On the shore dimly seen through the mists of the deep,
Where the foe’s haughty host in dread silence reposes,
What is that which the breeze, o’er the towering steep,
As it fitfully blows, half conceals, half discloses?
Now it catches the gleam of the morning’s first beam,
In full glory reflected now shines in the stream:
‘Tis the star-spangled banner, O! long may it wave
O’er the land of the free and the home of the brave.

And where is that band who so vauntingly swore
That the havoc of war and the battle’s confusion,
A home and a country, should leave us no more?
Their blood has washed out their foul footsteps’ pollution.
No refuge could save the hireling and slave
From the terror of flight, or the gloom of the grave:
And the star-spangled banner in triumph doth wave,
O’er the land of the free and the home of the brave.

O thus be it ever, when freemen shall stand
Between their loved homes and the war’s desolation.
Blest with vict’ry and peace, may the Heav’n rescued land
Praise the Power that hath made and preserved us a nation!
Then conquer we must, when our cause it is just,
And this be our motto: ‘In God is our trust.’
And the star-spangled banner in triumph shall wave
O’er the land of the free and the home of the brave!

Key clearly gave credit to God as he should. Without the Lord’s mercy and guidance, we too will fall. The forces of evil pound Christians daily with shells and flares, hoping to destroy and claim our fort. The same forces pounded Christ, hung Him on a cross and buried His body in a borrowed tomb. For three days, all hope was lost.

But then came the morning. Then came “dawn’s early light.”

Jesus rose from the tomb and raised His own flag in victory. We celebrate our independence as a nation this week, and our freedom from sin every day.

“For the Lord your God is he that goeth with you, to fight for you against your enemies, to save you.” DEUTERONOMY 20: 4 KJV

Not everyone will stand up for the Lord either. This is sad, but it won’t deter me. I will continue to honor the Savior and our American Flag too.

Now I hope you enjoy perhaps the best rendition of the Star-Spangled Banner ever by Whitney Houston before Super Bowl in 1991. The song came at a much-needed time in our history as we just entered into the war. A time when all Americans came together and no one kneeled in protest. This is how Key envisioned the song to be sung, I’m sure. Please rise, put your hand over your heart, remove your hat. and listen. And have some tissues handy.

If that doesn’t send chills down your spine then you have a problem. We need more patriots. We need more people to honor and respect our country — the greatest on earth!

What do God and country mean to you? I’d like to hear from you. And if you don’t agree with me, please keep your remarks civil.