I rise to my feet when our National Anthem is played. Sadly, some players in the National Football League do not.

The first amendment to the U.S. Constitution guarantees freedom of speech to us as citizens. That includes the freedom to demonstrate and protest. I get it. However, I don’t understand protesting the very symbol of our freedom — our flag.

Old Glory has been beaten, burned and battered over the years – but she still waves proudly. The red, white and blue represents the freedoms we as Americans enjoy daily. We have these liberties because men and women in our military have fought and died so we can enjoy them.

We have a right to voice our opinion and express our thoughts and even protest. I have taken part in peaceful demonstrations over the years both locally and on the national stage. 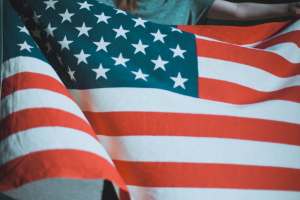 I understand when people have differing opinions and can intelligently tell me why they feel a certain way. I cannot understand violence or ignorance.

And I don’t understand why anyone – especially a player in the NFL will protest the playing of our nation’s theme. I feel disgusted and outraged every time I see a rich and ungrateful athlete take a knee instead of standing and honoring our banner.

There is no reasonable explanation for this dastardly deed except for treason. They can disguise it all they want, but it’s obvious – they do not respect the United States military or our flag. If they want to protest on a national stage, then sit out of the game which pays them millions of dollars. They won’t dare go against their employers, but they will put their fists up in anger to the nation which allows them to make a living. It’s total hypocrisy.

The person who started this juvenile temper tantrum trend is the unemployed Colin Kaepernick (as of today Sept. 5, 2017.) He took a knee during the anthem when he was good enough to play for the San Francisco 49ers in August of last year.

What does it represent? I suppose he missed all the coverage of Americans responding to those affected in Texas from Hurricane Harvey. That is America. That is what the flag represents.

He then showed up at a media conference wearing a t-shirt honoring the former communist dictator of Cuba, Fidel Castro. Kaepernick said he wanted to stand (by kneeling during the National Anthem) for those who are oppressed. I guess he didn’t comprehend Castro oppressing thousands of his own people during his reign of terror.

It’s a good thing he didn’t live in Cuba and disrespect its flag. The law in Cuba states anyone who shows disrespect to the government can be put in jail for up to three years. Move there Colin, please.

In 2015, North Korea executed a vice premier for showing disrespect to its brutal leader Kim Jong-Un. What did Kim Jong-Jin do to be sentenced to death? He simply fell asleep in a meeting. What would happen to Colin if he fell asleep while watching a scouting tape in North Korea? Oh, yeah. They don’t have professional football where athletes make millions of dollars. Maybe Colin can move there and start a league of his own. Better stay awake though.

Four years earlier in Dubai, a man was sentenced to prison for a year for disrespecting the United Arab Emirates flag. Hey Colin, move there and see what happens to you.

Yet the popular and unpatriotic trend in the NFL continues. Recently and sadly during a pre-season game, more than a dozen members of the Cleveland Browns took a knee during the singing of the National Anthem and claimed they were praying. I  have my doubts they were praying to my Lord. If they were,  then I don’t think He listened. The God I serve honors the United States because we honor Him.

It astonishes me how grown men can disrespect a nation and a flag which allows them to make millions of dollars just to play a game.

We live in one nation under God, who has granted us freedom.  No other country on the earth enjoys the liberties we have – which includes the right to protest and express yourself. But protest honorably and know why you are trying to make a statement.

My suggestion is to find some other way to get the point across. Instead of kneeling and mocking our nation before the start of a game, write an opinion piece for a major newspaper or buy a billboard advertisement. On second thought, that might require some well thought out reasons to demonstrate against the greatest nation on earth.

The Star-Spangled Banner stands for freedom. The 50 stars represent all the states while the 13 stripes stand for the original 13 colonies. White means purity and innocence while Red symbolizes courage. Finally, the Blue stands for determination and perseverance.

“Freedom is never more than one generation away from extinction.”

Perhaps these men who kneel during the anthem should take some history lessons or spend some time with some veterans who fought for our freedom. Maybe they can talk to a widow of a soldier who died so they can have the right to kneel during the National Anthem. Let’s see if they have the guts to do that instead of taking on a linebacker.

They are ungrateful men who don’t appreciate what this country has done for them. If they don’t like what’s going on, then do something about it. Instead of kneeling in protest, try kneeling before the cross of Calvary and praying to a loving Savior – after the National Anthem of course.

There at the cross where Jesus was crucified, the ultimate price was paid for our freedom as a Christian. I thank God we live in the USA and enjoy the blessings of life.

“As free, and not using your liberty for a cloke of maliciousness, but as the servants of God.” I Peter 2:16

I humbly kneel in prayer to my Lord and then stand proudly with my hand over my heart during the playing of the National Anthem. It’s the least I can do to honor my Savior and the brave men and women of our armed forces.

Do most NFL players love this country? Yes. Should we as citizens be offended by the childish few who don’t? I am.

President Reagan said this; “Freedom is never more than one generation away from extinction. We didn’t pass it on to our children in the bloodstream. It must be fought for, protected, and handed on for them to do the same, or one day we will spend our sunset years telling our children and our children’s children what it was once like in the United States where men were free.”

Would you want the NFL players who kneel during the National Anthem to represent you on the battlefield? No way. I don’t want them representing my favorite team either. I’ll root for someone else – a true and thankful American. They appear to be the generation leading freedom to extinction. It has to stop. To me, this is the ultimate unsportsmanlike conduct call on any player.

What can you do? Just what I am doing. Expressing my outrage and disgust over these high-priced citizens of a free nation. Call each franchise and let them know you are not happy with one of their employees for showing disrespect. It may take a few minutes out of your day, but thousands of men and women gave their life for you to be able to express your opinion.

These childish players have politicized football. It should not be like this. There are consequences for actions.

Do you stand during our National Anthem?

It’s fourth and goal. What call will you make?

10 thoughts on “Stand for our National Anthem”