This post will not be a regular blog, but it is my testimony of recent events.

I have waited with patience for the right moment to address this issue. The great and esteemed philosopher Rafiki said it best, “It is time.”

About a year ago, I was at the Asheville Christian Writers Conference with my wife, Angie, at Billy Graham’s The Cove. We loved it there and made some life-long friends as we were introduced to the world of Christian writing.

A couple days into the conference I felt a twinge in my lower back. The pain was brief and reminded me of a pinched nerve. As the week went on, so did the pain. By the end of the conference, I could barely sit down. Each time I stood was a new adventure in agony. All of a sudden, I felt like I was 107 years old.

When I returned home, I visited my chiropractor, who gave me my first of many “adjustments.”

The next week, we attended the Florida Christian Writers Conference where the pain intensified. Sharp needles ravaged my lower back which led to no sleep and made me irritable (at least that is what I blamed it on.)

While at this conference, I received my first ever massage. The experience warranted some relief, but it was brief.

After weeks of total discomfort and relentless pain, I went to my family doctor who ordered an MRI.

Ah ha! The picture revealed the culprit. An 8-mm size cyst on my lower spine, up against the SI joint, next to the nerves. That was it. Every time the cyst made contact with the nerves, Holy Cow did it hurt.

We journeyed to Cincinnati to Beacon Orthopedics where the doctors suggested a spinal injection.

That was not what I wanted to hear, but if the doctors at Beacon are good enough to treat the Cincinnati Reds and Bengals, then I trust them.

I hate needles. I watched my sons come into this world, and it didn’t bother me. I even helped. There was a time when I worked at a funeral home in my college years and had to put people back together again – literally. I was okay. But show me a pointy needle, and I almost pass out. Weird.

The day came when I had to travel back to Cincinnati to get “stuck.” The first three injections felt like a sting. Not bad, I thought. Then the doc says to me, “Now this one’s gonna’ hurt.”

He wasn’t lying. You might have heard me scream that day – from anywhere in the country.

Relief was supposed to be instant, but instead, the pain became worse. One day I was in Kroger with Angie, and the pain took me to my knees. There I was in the aisle clinging to a double pack of Brawny paper towels for comfort.

Surgery was the next step. But it wasn’t going to happen for another two months.

We went to church, but that was not a haven of rest. One Sunday morning, our pastor’s wife found me doubled over in the hall in pain. She thought I was either in the middle of a kidney stone attack or filled with the Holy Spirit. Wrong on both accounts. The cyst was having fun. 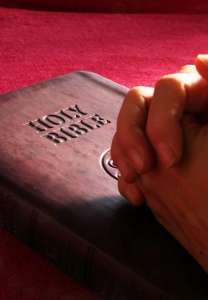 Angie and I were about to leave our church after a Wednesday night prayer meeting service when our friend, Jamie, and her daughter, Brittany approached and asked me how my back was doing.

“It’s killing me, but thanks for asking,” I said.

“Do you mind if I pray for you?” Brittany asked.

I countered. “Sure, but make it fast. I just want to get home.”

Two days later, I noticed I had not taken any Motrin. Up to that point, I was treating them like they came out of a PEZ dispenser. I lived on about 15-20 per day to relieve the pain.

This went on for several days. No pain. I had a consultation phone call with a nurse from Cincinnati who asked me to describe my pain level. When I was previously at her office for a consultation, on a scale from 1-10, my pain level was 46. Now, it was zero!

For the first time in seven months, no pain.

“I don’t know if the shot worked, or prayer worked, or both,” she said. “All that matters now is that the pain is gone. Let’s cancel the surgery.”

I love that woman! And I thank God for medical doctors, who are used by the Lord.

I also love Jamie and Brittany for their obedience to pray with me.

These ladies don’t have a magical power, but they are close to the Lord. God used them to show me His healing power. I have always heard of people being healed, but I had never experienced it for myself.

God still heals. I am a testament to His power, and I thank Him for allowing me to go through this.

There was no lightning bolt from Heaven or other drama. There was only a sweet and gentle prayer from two godly ladies.

The pain is gone. That’s all I know. Praise God!

I am all too aware there are times when the Lord chooses not to heal, such as in the case of my sister-in-law Dee Dee, who died of cancer after she claimed God’s healing touch.

That is a discussion for another blog. But in the meantime, this article is meant to give glory to the Healer. There is no way to argue against what happened to me. Skeptics may doubt it, and that’s okay. The MRI revealed a cyst on my spine near my nerves.  I lived through months of agonizing pain. Two days after two women asked the Lord to intervene, the pain stopped. Explain it to me if you don’t believe in healing.

Have you ever been healed? Has God stepped in when the doctors could not? Tell me about your experience.

Del Duduit is an award-winning freelance writer who lives in Lucasville, Ohio with his wife, Angie. Follow his blog at www.delduduit.com/blog and on Twitter @delduduit. He is represented by Cyle Young of Hartline Literary Agency.

4 thoughts on “No Other Explanation!”