SAN ANTONIO — I have accumulated a few regrets in my brief 51 years on Earth.

But as Paul Anka penned in the song, My Way, there are “too few to mention.”

But Rick Barnes and I share one regret together. Although some disappointments in life may not have a happy ending, this one does.

Rick is the head basketball coach at the University of Tennessee, and he has a long list of professional accomplishments:

You get the idea. The man knows how to coach college basketball and demonstrate character on the court.

But in the midst of all of these accomplishments lies one haunting thought—something he does not dwell on because it reminds him of his neglectful days.

Yet, it also keeps him on the path to making sure that one day, he makes it to Heaven’s Big Dance.

“I didn’t lead my kids to the Lord,” he told me Saturday morning at a private reception in San Antonio, Texas.  Ironically, it was Rick’s two children who huddled up with their dad and drilled the point into their father’s head that something had to change.

In his quest to be the best coach in the world, he became distracted by what the world had to offer.

“Money and fame became my priority,” he told me. “I grew up in church and knew right from wrong. But I told myself I was okay. But deep down inside I knew I wasn’t.”

One day, his children called timeout and invited their dad into a family huddle.

After their talk, he was upset, but he knew they spoke from the heart. They power dunked on their dad and slammed home the point.

He knew the changes he had to make and put them into play. He started to read the Word of God again and made a commitment to daily prayer. He made things right with the Lord and his family.

“By the grace of God, my eyes were opened,” he added. “He gives us eternal life, and I see that once again. My focus is on Christ first now, and I have my kids to thank for that.” 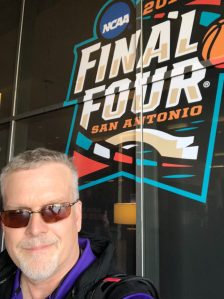 Rick told the same story to a crowd of about 1,000 people at the Legends of the Hardwood Breakfast hosted by Athletes in Action in San Antonio, Texas at the Final Four Weekend. Many were in tears when he finished.

I sat at a table with two fathers and their kids — they were all silent.

Rick has been a role model for players for years as well as an ambassador for Christ everywhere he goes. He makes it clear he owes everything to a risen Savior.

During the breakfast, he received the 2018 Coach Wooden Keys to Life Award which honors basketball figures who model the characteristics of UCLA coaching legend John Wooden, including his high level of moral character, integrity, and faith, on and off the court.

Although my resume does not compare to Rick’s, I have had my share of national and state-wide writing and sales awards.

Yet we both felt an emptiness at times during our triumphs.

I too share his regret because I did not lead my two boys to the Lord.  However, today they are serving God, and I look up to them and admire them as a father.

At times, I feel as though I let them down, but I can’t change the past. Instead, I focus on how wonderful they turned out, and I like to think I played a small role in their outcome.

No regrets – only delights.

I had a good time in San Antonio at the NCAA Men’s Basketball Final Four Tournament. But here are my own unique Four things I am most happy about – and this is Final.

Every father wants their children to do better in life—mine have already passed me by, and I’m proud of them.

“The most important thing in the world is family and love.” John Wooden

I’m glad I was able to spend a few moments with Rick – he made me realize how great my family is to me.

And for good measure, I’ll toss in one more that makes me happy in case the game goes into OT.

I think both of my sons appreciate and love me for all the devotion I have shown them over the years. I have loved them no matter what the circumstances. I was not their “pal” or “buddy”  when they grew up — I was their father. There were good times and stern times. No regrets!

Do you have any?

It’s not too late to change those feelings into joy and satisfaction. You will find it when God enters your life – then you will be victorious as a coach, husband, and father.

4 thoughts on “No regrets”