Over the past few weeks, I have written about Christmas caroling, my favorite Holiday movies, and my list of cherished Christmas songs.

I have wrapped and opened presents, including my new Penguin coffee mug from my granddaughter Sophie, and I have stuffed myself with my mother-in-law Arlene’s famous Christmas sugar cookies.

I have also listened to the Holiday Traditions station on my Sirius XM non-stop.

This has provided a respite from the daily onslaught of negative and nasty news.

I enjoy politics, but I must admit I have grown weary of the juvenile and reckless behavior on both sides of the aisle. In our home, we have Fox News on quite a bit, but it has become silent over the past few weeks. I have noticed I am in a better mood since the arguing and shouting has been turned off.

But the other evening, Angie ran across an article that centered on good news. It was a look back at the Christmas classic Silent Night.

The song turned 200 years old on Monday – which was Christmas Eve.

Go back in time with me on a cold and snowy night in Obendorf bei Salzburg, a small town in Austria, to a tiny St. Nicholas Catholic Church.

The beautiful poem was written in 1816 by Josef Mohr and set to music by Franz Gruber. Two years later, on a chilly Christmas Eve, it became what is now a worldwide favorite masterpiece.

The song has a haunting and lonely sound, yet it brings people together when sung. The message is clear — “Christ the Savior is born.”

On this particular night, the poor little village and country were still feeling the brutal effects of the Napoleonic Wars.

The church organ was broken due to what some say was a curious and hungry mouse, so a guitar was the instrument first used to accompany this cherished song.

The congregation sang the chorus together while Mohr played the guitar and Gruber sang bass.

The song brought them all together during a time of depression and destruction. For a few moments after midnight, all was calm and all was bright.

The song was about the glorious birth of the Christ child, but it was also a plea for peace in the aftermath of war.

Perhaps they longed for a Silent Night.

Maybe they desired a moment of Heavenly Peace. 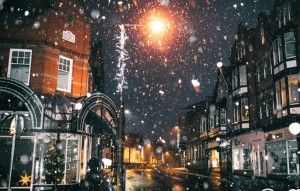 But the story about the man who penned the words is inspirational.

Mohr was born to parents who were not married, which made him the unfortunate victim of a social status he did not choose. He was an outcast at the time and shunned by many.

But one man, Johann Nepomuk Hiernle, overcome the negative stigma bestowed on the young Mohr and believed in the boy and his talents.

He mentored and helped the young man and made financial and emotional investments in the lad. Hiernle turned into a modern-day cheerleader.

In addition, a school teacher, Andreas Peterlechner and a pastor, Simon Dobler, also saw something special in Mohr. They encouraged and helped him study under Georg Hartdobler who was a well-respected musician.

The boy’s touch for music blossomed over the years.

Weeks after the song debuted, the organ repairman, Karl Mauracher, came to the church to fix the hole created by the rodent. He noticed the lyrics near the organ and was enchanted and mesmerized with the words and composition.

He soon introduced the piece to two friends of his who later performed it in New York City in 1939. It’s been a part of the Christmas Spirit ever since.

It’s hard to believe the song was introduced on Christmas Eve 200 years ago in a tiny village in war-torn Obendorf, Austria. It has been performed by hundreds of professional singers and sung in churches all over the world. The hymn inspires a remarkable and unique feeling.

If someone had not believed in Mohr or encouraged him, we might not have the carol Silent Night.

The hustle and bustle of Christmas are a part of the season. They add excitement and fun to a holiday which has become commercialized. But that’s okay as long as we keep the meaning where it needs to be. I enjoy the shopping and the parties, but I hold dear the reason for the season.

We must recognize and honor that:

Radiant beams from Thy holy face

With the dawn of redeeming grace

The clamor and pandemonium from little children are a wonderful part of the overall Christmas experience. But amidst the commotion of the season, there is always an appreciation for the holy silence of the night.

The remarkable gift of Silent Night may not have happened if Hiernle had demonstrated judgment and prejudice. But instead, he showed encouragement and love.

This all came together years later when the organ repairman discovered the heart-warming song while he fixed the instrument one night — one Silent Night.

Many people played a well-crafted role designed by God in the development of the most beloved Christmas song ever written. It’s a gift I enjoy each year.

We show our appreciation to our loved ones with presents, in essence with the admiration and astonishment the wise men showed the baby Jesus.

What message did the Lord want to send through the story of Mohr’s life?

Perhaps it’s about encouragement and love. These are gifts you can give that won’t cost you a dime and can be priceless to the recipient.

Your nurture and motivation toward someone might be what is needed to spur on a young person’s dreams. And who knows what magical result could emerge from your kindness?

Wherefore comfort yourselves together, and edify one another, even as also ye do. (I Thessalonians)

Happy 200th Anniversary to Silent Night, and Merry Christmas to all.