The cornerstone of the Christian religion is centered around faith.

We believe Jesus Christ was born of a virgin, lived a sinless life, was crucified for our sins and rose three days later to defeat death and the grave.

Webster says it’s “complete trust or confidence in someone or something.”

It’s easy to possess this quality when life is without problems.

We also take it for granted each day.

We drive our vehicles over a bridge and expect to reach the other side safely. We don’t know who built the structure, yet we don’t stop and question.

We have faith that a dark room will become bright when we flip a switch. No questions asked.

We take a prescription for medicine filled by a pharmacist we may not know and manufactured by a company we may know nothing about, and yet we expect the pills to make us better.

Next week I will debut a book that has been more than four years in the making.

Having Impossible Faith is a different examination into the foundation of every believer.

The book includes the true life stories of three people from my area who exemplified faith through difficult circumstances.

My sister-in-law, Dee Dee, is the first subject featured in the first three chapters.

She faced the decision of whether to seek medical treatment for her third bout with ovarian cancer, or trust God to heal her.

Her story of faith spread like a California wildfire.

Thousands of people followed her story and were inspired by her determination.

“DDFaith” was more than a movement … it turned into a revolution against the enemy.

The next three chapters feature Lois, who I compare to Job. She lost everything, but she maintained an amazing outlook and dependability on God for her everyday survival.

Here is a small portion from Chapter 5 … and this really happened.

Lois helped to raise Tabitha, a teenage lady who she considered a daughter. Tabitha’s mother planned to visit them, and Lois decided to cook a meal. She wanted to make cornbread but did not have eggs or money to buy them. So, she did what she did best. She prayed to God for them.

What a sign of humility. But not to her. She viewed God as her Heavenly Father. What do children do when they want something? Ask for it.

I remember when my children used to plead for candy or ice cream. Most of the time, I thought these were not much to ask for, and I granted their request. As their father, I gave them what they desired. To God, what were eggs for His child? Easy.

She did not live near a farm; hence, it was quite the surprise when a duck flew into her yard, set up shop in the flower bed and lay an egg! The average duck lays one a day, and maybe two on rare occasions. However, God used this bird to provide Lois with enough each day to make cornbread and biscuits for several meals.

Tabitha’s mother stayed for one week. When she left, so did the duck. 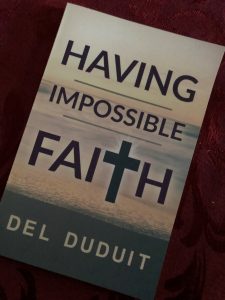 Then there is Billy, who walked into my church one day several years ago. When he came through the doors, he was different. He was yellow and dying. Doctors from the Cleveland Clinic had sent him home with just four months to live. Stage 4 cancer. No hope. No cure.

That morning, he went to the altar and surrendered his heart to God. His life changed forever.

Billy was busy preparing to leave this world. He came home to put his affairs in order and went to church to prepare himself to meet his maker.

The three chapters dedicated to his story will leave you shaking your head in amazement. Cancer was not the only battle he fought.

The final chapter is personal. It describes my own struggle with faith when my wife, Angie, contracted a mysterious medical condition that no physician knew how to treat, until ……… (cliffhanger)

The book explores faith and the difficulty of maintaining it during challenging circumstances.

I spoke with several people who were directly involved with all three subjects, and they told me how they dealt with the struggles of watching their loved ones suffer through their battles for survival.

How difficult is it to have “faith” when you are thrust into a life-changing situation? We all say we have it, but do we really?

Do you believe you could be healed of cancer a third time?

Would you expect God to bring you an egg?

What would you do if your doctor told you he was sending you home to die?

Having Impossible Faith tells you how three ordinary people reacted when they were faced with  daunting and life-threatening predicaments.

Click on the video below to listen to what Karen Peck, Dove Award-winning and Grammy-nominated Southern Gospel music legend, said about the book.

Will it make you cry in a good way?

I hope it blesses you and gives you a different perspective on faith.

You can purchase Having Impossible Faith on Amazon here.

His book, First Down Devotions: Inspirations from NFL’s Best, can be purchased from New Hope Publishers here, or on Amazon here

8 thoughts on “Is Your Faith Impossible?”