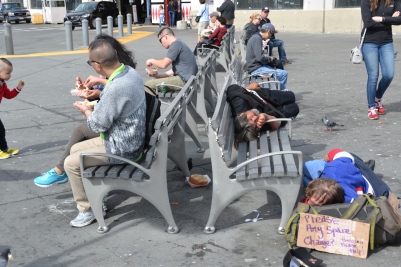 I took this picture during a recent visit to Fisherman’s Wharf in San Francisco, Calif.

Over the past couple of months, my wife and I have had the wonderful opportunity to travel literally from coast to coast. We spent a few days in Sacramento and San Francisco, Calif., and we later had a wonderful weekend in Washington D.C.

We saw a lot of fantastic things along the way. We biked across the Golden Gate Bridge, and we looked sky high at the coastal red wood trees in Muir Woods. We toured the infamous Alcatraz and also wound our way down Lombard Street.

Then this past weekend, we went to Washington D.C. for a weekend get-away to go to a Norah Jones concert in celebration of my 50th birthday. We visited the newly renovated Trump International Hotel (a topic touched on in my previous blog) along with a wonderful behind-the-scenes tour of the U.S. Capitol. We strolled along the reflecting pool and sat on the steps of the Lincoln Memorial, and then we made that eerily silent saunter along the Vietnam Memorial. That’s a humbling and lonely 247-foot walk.

We saw most of the sites, including the National Christmas Tree all lit up in front of The White House.

But on these trips, we also saw some things that have made me wonder about myself, and they have made me search deep inside of who I am – or who I want to be.

“But by the grace of God I am what I am; and his grace which was bestowed upon me was not in vain…” I Corinthians 15:10. KJV.

During the few days in D.C., we saw our fair share of homeless people. If you have ever been in downtown for any amount of time, seeing homeless people take over and claim a bench is very common. Keep in mind that this is only a couple of blocks from The White House — home of the most powerful man in the world. We saw a man outside on a bench with all of his stuff – a blanket, a tarp and some cigarettes – in front of the Marriott Metro Center. That was his home. Did I stop to help him? No.

One of the more alarming features of some of the homeless was that some actually had IPhones and were talking on them when we walked by. That was incredible. No home, no food, no job – but they had a smart phone. Obviously, they didn’t need my help. I can only hope they were calling to set up job interviews, but I seriously doubt that was the case.

While we were in San Francisco, we were walking to Lombard Street and couldn’t help but overhear a homeless man cursing and threatening the safety of another man who would not give him the butt of his cigarette. He was very descriptive with his language and brutally honest about how he felt toward the man who would not provide him with a smoke. Was I going to help this man? Probably not.

When we were walking around Fisherman’s Wharf – which is a fabulous place – we came upon a group of crowded park benches, which were placed back to back.  To one side, we noticed several people stuffing their faces – which is common. I’ve done my fair share of that particularly if it involved a girl named Little Debbie. But on the other side, we noticed one homeless man asleep on the bench with another below him sleeping on the ground.  They each had signs that read “Please any spare change?”

The scene was ironic. On one side of the bench, there were people who appeared not to have a care in the world, while two men without anything lay two feet away. Did I help? No. I took a picture instead (the one at the top of this blog).

When we were in Sacramento, we were walking to dinner one evening when we were approached by a homeless man. This guy was absolute in his donation requirements. Keep in mind this was about the sixth or seventh person who had asked us for money within a three- block span. I guess I must have had a sign on my back that said “visiting ATM.” I had given a couple of dollars to a couple of them when the last gentleman approached. He wanted at least $5. I guess if there was any negotiating to be done, he could always come down. But he specifically wanted $5. By this time, I was a little miffed and told him that I had been asked by numerous people for money along the way and that if I had given my money to all of them, then I would have to borrow from him. So, I went on my way. Did I help him? No.

I give to charities all the time and do some work at Christmas time to make myself feel better, I think. I give to the Salvation Army when I go to Kroger or Walmart, but do I do it for the right reason? Do I do it so I won’t feel guilty? I don’t know.  I like to think of myself as a giving person, and I am. But why didn’t I help those people I saw over the past few weeks? Did I care?

Sometimes I struggle with this issue. Am I helping them, or enabling them?

I can’t give them a job, and I think if I give them money, they just might use it to buy cigarettes or booze or drugs. So, I most often refuse to give and not get my hands dirty. After all, I give to charities and let them take care of the problem.

But after witnessing what my wife did in Sacramento really smacked me in the mouth.

We were in Old Sacramento, and I had just paid $9 for a doozy of a milk shake when Angie was approached by a woman asking for money. I arrogantly told my wife to just avoid her and sit down and enjoy her cone.  She didn’t listen to me – which was good.

Instead, Angie offered to take the woman inside and said she would buy her something to eat instead of giving her money. I thought that might deter the beggar. Instead, the woman agreed, and my wife provided a meal for her. Would I have done that? I didn’t.

So, over the past couple weeks, I have had the opportunity to take inventory of myself. Would I want anyone to help me? I don’t know what these people have done or how they got in their situation.

“He that hath a bountiful eye shall be blessed: for he giveth of his bread to the poor.” Proverbs 22:9 KJV.

Over the years, I think that many of us have become numb to people begging and asking for help, mainly because we have been taken advantage of by some. Plus, there are so many hurting people out there, and it’s hard to distinguish from those who are just playing you, to those who really need your help. So, the easy way is just to ignore and rely on organizations to help.

However, I am taking inventory of myself. My wife helped a woman when I did not. I thank her for that, because I know firsthand that the woman was grateful for just a little food. Can I help everyone? No. Can I help someone? Yes, I can.

So, if I cannot give bread when I have it, I may not have it for long. I have learned a lesson about giving – and it has come at a good time of year. Thanks, Angie.

“Give, and it shall be given unto you; good measure, pressed down, and shaken together, and running over, shall men give into your bosom.” Luke 6:38. KJV.

2 thoughts on “A lesson learned about giving”